As we said before, on this “Website Traffic Series” we are going to cover ALL the traffic generation tactics and strategies out there, even the weird and the blackhat ones! 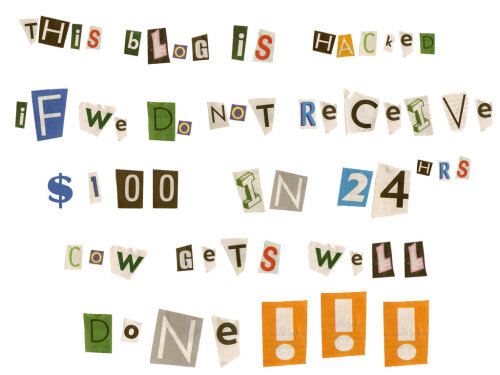 The concept: The idea is pretty simple. Popular websites that get hacked tend to make the headlines around the blogosphere. As a consequence, they receive many backlinks and a good amount of traffic. People are curious, and they will want to check out what happened.

Now instead of opening up some security holes on your website and waiting for a real hacker to come (which apart from the traffic would also give you some head aches…) you could simply fake the attack.

All you need to do is to create a weird HTML page, put a “This website was hacked” message there, and redirect your domain to that page.

Does it work?: Yes and no. First of all you need to have a somewhat popular website already for this to work minimally well. No one is going to care if your two-week old .blogspot blog should get hacked, right?

If you do have a somewhat popular website, though, there are chances that you will receive a good amount of backlinks and traffic with this technique. JohnCow.com pulled that trick some months ago. For 24 hours he redirected the visitors to his domain to a page that contained the image on top of this post.

Many people linked to him as a result. Some thinking it was for real. Some calling him out for a cheap stunt. Others just intrigued by the whole deal.

As you can see it does work to some extent, but it will also bring some negative publicity and criticism to your website.

How to get started: Personally I would not try to generate traffic with this method. I think it might work for sites that deal with blackhat or out-of-the-box promotional methods (JohnCow.com was born as a parody site after all), but that is not the case with most of us. Try this at your own risk, therefore.

Over to the readers: Have you ever considering to take something on your site to generate traffic? Would you get pissed if a website that you read regularly pulled this trick on your?