A couple of weeks ago Technorati released the State of The Blogosphere 2010, and one part of their report that caught my attention was the traffic sources breakdown.

The report illustrated that bloggers are getting social media traffic from two websites mainly: Facebook and Twitter. All the others have been dwarfed, as you can see in the image below. 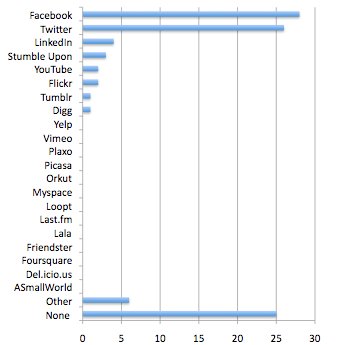 Some years ago getting in the front page of Digg, StumbleUpon or Delicious was the dream of any website owner, but it looks like that is not the case anymore. Facebook and Twitter are the only options right now.

And there is even more evidence to confirm this trend. Digg launched a new version some months ago, and it pretty much collapsed ever since. Its loyal users abandoned the ship claiming that the new version completely changed the dynamic of the site, and traffic is going down hill. I remember that a couple of years ago the top stories would get as much as 3,000 diggs, and now they get 200 or 300.

What about Delicious? It was one of the first social bookmarking sites, and it was tremendously useful, with a huge number of users who loved the service. Last week Yahoo! (the company who bought the site back in 2005) announced that they will either be closing Delicious down or selling it to someone.

I haven’t seen any news about StumbleUpon, but I don’t think it is going that well either. I used to get a lot of traffic from it on most of my websites, and that is all gone. Most of my webmaster friends are seeing the same pattern, so people seem not to be stumbling that much anymore.

All this background information to ask the following questions: Are social bookmarking sites dying? If so, why did this happen? The idea of bookmarking web pages socially seemed like a solid one, and if you ever used it you certainly saw the benefits. Despite that users are moving on to new and different things. What do you think?