Last week over DailyWritingTips we published an article about writing software, with of 25 of them for all sorts of purposes. Several readers recommended a word processor called Q10, and I decided to give it a try.

Now, I am not sure if it would be an exaggeration or not, but I think that this little software quadrupled my writing productivity. 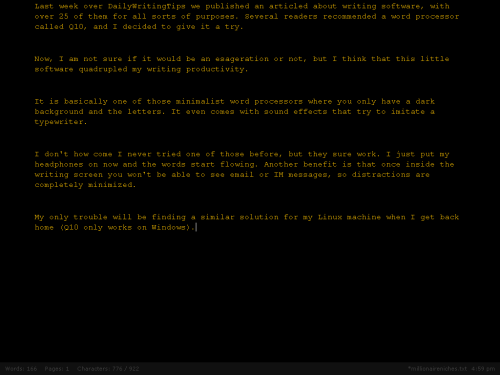 It is basically one of those minimalist, full-screen word processors where you only have a dark background and the letters. It even comes with sound effects that try to imitate a typewriter.

I don’t know how come I never tried one of those before, but they sure work. I just put my headphones on now and the words start flowing. Another benefit is that once inside the writing screen you won’t be able to see email or IM messages, so distractions are completely minimized.

My only trouble will be finding a similar solution for my Linux machine when I get back home (Q10 only works on Windows).