And the Copyright Infringement Hunt Begins…

You probably already heard about SOPA/PIPA and the whole debate around it, right? Last Wednesday it was a really interesting day on the Internet, probably representing the biggest online activism movement ever, with all major online companies and websites protesting against the bills.

The movement was pretty successful, with many senators reversing their stance on the SOPA/PIPA bills, and making it much harder to get them approved now (i.e., the Internet folks won the first battle of the war).

The day after, however, another blow stroke. The founders and key employees of the site MegaUpload.com (no direct link, to play on the safe side…) were all arrested (in New Zealand), and the domain name was seized by the FBI. The reason was alleged copyright infringement, racketeering and money laundering.

According to Google MegaUpload was the 90th most popular website in the world, with 34 million unique visitors per month. The owners were making millions with it. If you visit the site now you’ll see the following message: 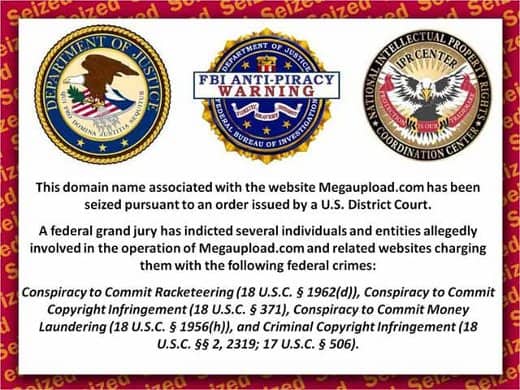 Will there be more sites following? I am not sure, but it sure will be interesting to watch what will happen over the coming months.

8 Responses to “And the Copyright Infringement Hunt Begins…”