Update: I just did the random draw. The three winners, out of 198 participants, are: @ZoekmachineGuru, @rockus and @Medhy. I will contact you soon with your theme.

Mohsin from ThemeSphere contacted me to let me know about their latest theme, Spotlight. He said that he was willing to give away 3 licenses for our readers, so I went to check the theme out. 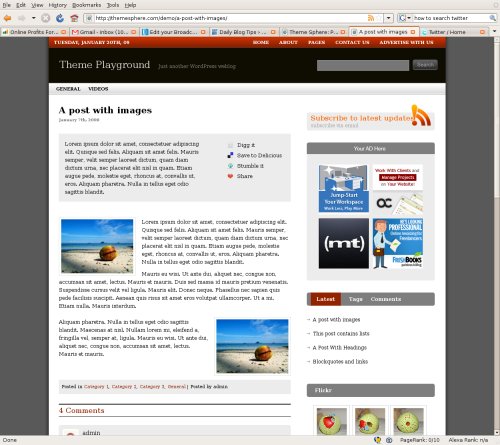 I must say that I liked it, because it comes with a very clean design, and packs most of the useful features that a blogger would need, including:

The price is not as high as some other premium themes either, costing $30 per license.

If you liked the theme and want to win a free license, though, all you need to do is to enter our Twitter contest.

There are just 2 requirements:

Entering the Spotlight contest. If you want to participate, follow @danielscocco and re-tweet http://xr.com/spot1

The deadline for the contest is this Friday, midnight. On Saturday I will update this same post with the name of the winners on the top.