I am glad to release the third WordPress plugin by Daily Blog Tips. My Top Commentators is a plugin that allows a blogger to discover who are the most active commentators on his blog (via the WordPress Dashboard, so other people will not see this information). You can also use different time frames for this, so you can see the top commentators:

Secondly, you can also see all the comments left by a single person, and edit or delete them via the plugin interface. 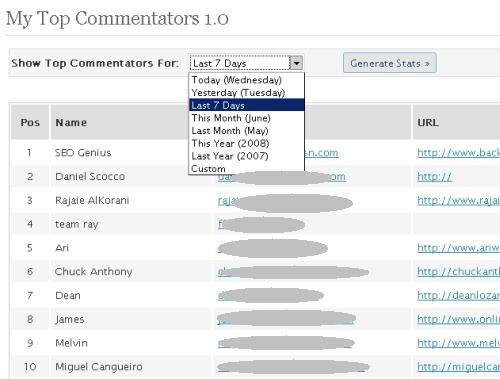 So, what are the possible uses for the plugin? Here are some ideas:

People that comment often on your blog are your most loyal readers, so I thought that it would be useful to know exactly who they are.

I would like to thank Pawan Agrawal from MaxBlogPress that coded the plugin specially for Daily Blog Tips. He has more outstanding plugins on his site so check it out.