The first edition of the Bloggers Face-Off was quite a success, featuring Problogger Darren Rowse against Internet Marketer Jeremy Schoemaker (click here to read). A lot of people suggested that a voting system would add to some salt to the challenges. While the initial purpose of the Bloggers Face-Off was only to provide an interesting reading for everyone I recognize that a voting system could make things more funny. Secondly it will also make it possible to create second rounds where we match the winners of past challenges against each other! Since there was no voting session on the first edition both Darren and Jeremy will receive a free pass to the second round.

This edition of the Bloggers Face-Off will feature two bloggers that help people make money online. The first one is the personification of evil itself, also known as the Dot Com Mogul, John Chow. The second one, Matt Coddington, started blogging only a couple of months ago but he is already gaining a lot of popularity in his niche. Let the battle begin! 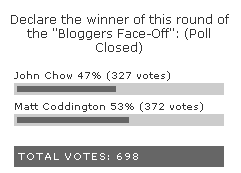