Around three months ago I started working with mobile apps. I handle the Android side of development, my brother the iOS side (iPhone and iPad), and there’s a designer that takes care of the visual aspects.

We already shipped a couple of simple apps (here’s the website of the company if you want to check it out, though it’s in Portuguese), and we are working on some complex ones too that will take a while to get completed.

Last week I released an app that I think you guys might find useful: it’s called To Do List Simplified. 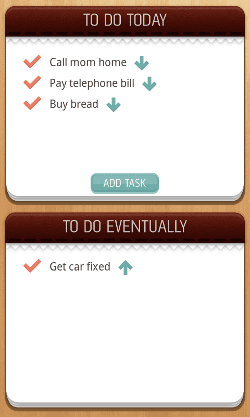 Basically I was tired of the complexity of most to do list apps and managers, and I decided to create a really simple one for my own use. In fact I was not planning to release it, but a friend of mine tested the app and really liked it, so he convinced me to make the app public.

On the app you have only 3 actions:

That’s it. There’s only one screen as well, as you can see on the image above.

The app is available for Android devices so far, and if people find it useful we’ll make it available on the iPhone as well. If you download and like the app make sure to give it a positive review!