The Godfather Approach to Internet Marketing

The Godfather is one of my favorite movies ever. I own the trilogy set in DVD, and I probably already watched it more than 10 times. The last time I tried, I could also recite the first 5 minutes of the movie by heart…. 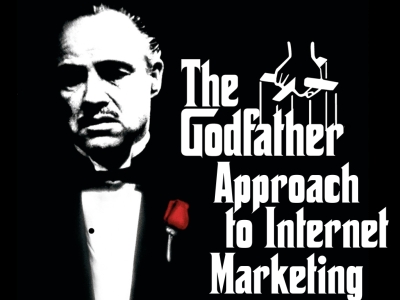 Why do I like it so much? For one thing my father’s side of the family came from Italy. I don’t have citizenship yet, but we are working on it. I have also lived in Italy for over seven years, and I love their culture.

Apart from those personal reasons, however, I also like the overall attitude of Vito and Michael Corleone. Not that I agree with their criminal activities, obviously, but they knew how to deal with people and how to handle their business.

In fact, I think that we can learn many different things from that movie, even if what you do is Internet marketing or blogging. Here are four of those things.

The very first scene of the movie shows Bonasera, an Italian who had his daughter attacked by some boys, asking Don Corleone for revenge. Bonasera explained that he didn’t seek for Don Corleone earlier because he didn’t want to get into trouble. Here is how Don Corleone replied:

I understand. You found paradise in America, had a good trade, made a good living. The police protected you; and there were courts of law. And you didn’t need a friend like me. But uh, now you come to me and you say — “Don Corleone give me justice.” — But you don’t ask with respect. You don’t offer friendship. You don’t even think to call me Godfather. Instead, you come into my house on the day my daughter is to be married, and you… ask me to do murder, for money.

Bonasera basically wanted to hire Don Corleone’s services in exchange for money. But that is not how things work inside the Mafia. You don’t hire the Godfather, you earn his protection by showing him respect and loyalty along many years.

Calling him Godfather and kissing his hand, in fact, is one of the most basic signs of that respect, and Bonasera didn’t even want to do that.

Want an example of how this relates to Internet marketing? I get dozens of emails every week asking me to check out a website or online service. Most of the times, however, the person won’t even include my name in the email salutation, revealing that he probably did not even take the time to read my site, or is mass emailing a lot of people hoping to get some free exposure for his stuff.

The people that start their emails with “Hi Daniel,” on the other hand, already earn some of my attention.

Now don’t get me wrong, I don’t see my self as a celebrity blogger or anything. But if this problem already happens with me, you can bet that it is much worse with the Seth Godins and Michael Arringtons out there.

If you want to have people’s attention, at the very minimum you need to be genuine and to treat them with respect.

2. Give Before You Ask

We’ve known each other many years, but this is the first time you came to me for counsel, for help. I can’t remember the last time that you invited me to your house for a cup of coffee, even though my wife is godmother to your only child.

Bonasera had never helped Don Corleone in the past. For the matter of fact, he hadn’t even invited Don Corleone to his house in an act of friendship. Then, on the day of the wedding of Don Corleone’s daughter, he showed up out of the sky asking for help.

Before asking people’s favors, make sure you have helped them in the past.

How does this apply to Internet marketing? Simple, before going around asking for links and mentions of your blog posts and articles, make sure that you shared the link love in the past.

Secondly, give without expecting nothing in return. Most people will be glad to return your favors, but this is something that should happen naturally, and not in a forced way.

3. Get Suspicious of People’s Generosity

At one point in the movie a Sicilian named Virgil Sollozzo wants to meet with Don Corleone to make him a partnership offer in the drug business. During the meeting, Sollozzo explains that Don Corleone will only need to invest 1 million dollar and share his political influence, and that in return he should get back 3 to 4 million dollars in the first year alone.

So why do you come to me? Why do I deserve this generosity?

Obviously there was something shady going on. The offer was too good to be true, and Don Corleone knew it better, so he just refused it.

Similar situations happen quite often on the Internet. You will get approached by people that wanted to exchange links with you despite their websites having a PageRank of 0; you will get approached by people that want to launch a joint venture with you but that have nothing to bring to the table and so on. Not to the mention all the emails and websites offering you big prizes in exchange for a click or some other action.

Whenever you find yourself with an offer that seems too good to be true, ask that person: “Why do I deserve this generosity?”

4. It Is Business, Not Personal

In Godfather Part II Michael Corleone starts inquiring with his partner Hyman Roth about the murder of Frank Pentangeli, a member of the Corleone family. Hyman Roth was the man behind it, but the murder was a business decision, not a personal one. Here is how he replied to Michael:

There was this kid I grew up with; he was younger than me. Sorta looked up to me, you know. We did our first work together, worked our way out of the street. Things were good, we made the most of it. During Prohibition, we ran molasses into Canada… made a fortune, your father, too. As much as anyone, I loved him and trusted him. Later on he had an idea to build a city out of a desert stop-over for GI’s on the way to the West Coast. That kid’s name was Moe Greene, and the city he invented was Las Vegas. This was a great man, a man of vision and guts. And there isn’t even a plaque, or a signpost or a statue of him in that town! Someone put a bullet through his eye. No one knows who gave the order. When I heard it, I wasn’t angry; I knew Moe, I knew he was head-strong, talking loud, saying stupid things. So when he turned up dead, I let it go. And I said to myself, this is the business we’ve chosen; I didn’t ask who gave the order, because it had nothing to do with business!

Admittedly, to talk about “murder as a business decision” is a crazy thing, but we can extrapolate the concept to legitimate contexts, too.

Another day a friend of mine contacted me saying that an online entrepreneur was copying the articles on one of his websites word by word. He told me that he wanted to retaliate, that he was planning to create clones of the websites of that person as well, hoping to damage his search rankings.

The mistake is obvious: he was reasoning at personal rather than at business level.

I told him that if he tried to retaliate, the situation would only get worse, and both of them would end up with a lot of problems and losses.

Instead, I told him to contact the other person in a friendly way, asking him if he could fix the problem. He did that, and the other person said “No problems, and sorry about that.” In a matter of days the problem was solved and both of them kept a good relationship.

So remember: it is business, not personal!

Browse all articles on the Strategy category

41 Responses to “The Godfather Approach to Internet Marketing”