Last Monday I launched a poll asking our readers if they trusted more .org or .net domains. If you ever searched for domain names you probably know that the .com extension, albeit being the best one, is most of the times taken already. People therefore are left with two main options: a .net or a .org version of their wanted domain.

Which one should you pick, however, if you want to maximize the number of people that will trust your website? According to our poll, a .org is slightly more trusted than a .net extension. The result was 55% against 45%. 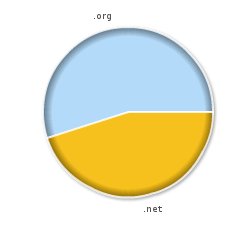 The final result was more balanced than what I would have expected initially. At some point during the poll the .org extension had almost 70% of the voting preferences in fact, but .net made a come back on the last couple of days.

Some readers commented that each extension serves for a different purpose, and that people should respect that. When the web was conceived, it is true, people wanted .com domains to be used by commercial websites, .net by networks, .org by organizations and so on.

The problem is that over the time they stopped monitoring and restricting who were able to purchase the domains with those extensions, so even a 15-year-old boy in Sri Lanka could pretend to be an organization and buy a .org domain….

In my opinion, the practice of using a specific domain extension depending on your whether you a commercial entity or a network or an organization has been completely eroded, and does not make much sense anymore.

To complicate things even more, ICANN recently also approved the creation or any type of extension whatsoever, like .sex, .microsoft or .shit.

So my rule of thumb remains: always go with a .com!

If you really can’t find a free .com that you like, go with a .org, as our readers suggested.

Browse all articles on the Domain Names category