Ever considered joining a blog network? Well, then you will probably like this edition of the Bloggers Face-Off. Those bloggers created two of the biggest blog networks on the Internet.

Jeremy Wright is the founder of b5media, a very successful network that includes some flagship blogs like Problogger.net and Copyblogger. Nandini Maheshwari, on the other hand, is the mind behind the Instablogs community, a blog network that is growing very fast. Enjoy! 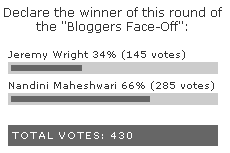