The first batch of the Blog Incubator Project is concluded. After 48 hours the voting session for the eight ideas is closed, and idea number one won with 33% of preference. You can read a description of all the eight ideas here. 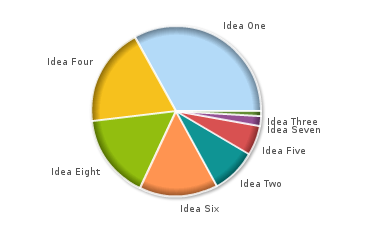 As you can see from the graph ideas four, six and eight were the runners up. If nothing else the authors of them know that some people would be interested in reading a similar blog.

So what was idea one about? Here is the description:

Name: Review Away
Topics: Review Away would be (as the name implies) a blog that reviews and gives away items. Be in gadgets, books, DVDs, vacation packages, even cars the sky is the limit when it comes to what can be given away on the blog. Site visitors would have varying entry requirements for entry into a giveaway, anything from leaving a comment, posting about it on their own blogs.
Why would it valuable?: Review Away would be valuable and interesting because everyone likes getting a chance at winning free stuff. Many persons may see an attractive item like a Sony PSP for example and would be interested to visit and learn about the item in the review, enter the giveaway and stand a chance of winning one of few that might be up for grabs on the site.
Background of the author: My name is Kirk, I am a 22 year old Jamaican who while searching for additional ways to supplement his day job income so that he can afford to enroll into college learnt about and got interested in earning via the Internet through blogging and other ventures.

What do I think about it? If structured properly I think it has good chances of becoming popular. It will be hard work until the blog achieves critical mass, but once the traffic and exposure are there, it will become a virtuous cycle. That is, there will be product owners wanting to give way their stuff because there are many readers who might end up buying it anyway, and the readers will want to stick around because they want to win the free stuff. One effect reinforces the other.

Kirk told me that he already secured the domain reviewaway.com, so he will be using the $200 prize to get a good design in place and to promote the blog initially. I will keep you guys updated when the blog goes live, and you will be able to give your advice.

Thanks for everyone who participated, voted and supported the first batch of this project. If there will be enough interest a second batch will be held in January.