Use Images with a White Background 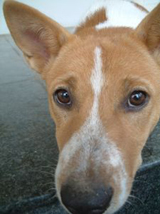 We all know that images have many benefits for blogs. They improve the overall look and entice an otherwise reluctant visitor to explore your posts.

Integrating images smoothly into a blog post, however, is not such a simple task. One little trick that I learned along the way is to use images with a white background. They integrate perfectly with any blog layout, merging with the content.

For sure you can still use images that do not have a white background, but in order to blend them with the content you will need to add some CSS styling. FreelanceSwitch is a good example.

If you do not have time to create a unique CSS style for your images, though, stick with the images that come with a white background and you will be fine. In order to illustrate my point I added two dog pictures in this post. The difference on how smoothly they integrate with the rest of the content is pretty clear, isn’t it?

Most stock photography websites (e.g., iStockphoto) have a vast collection of images with white background. Alternatively you can also try to remove the background manually with Photoshop (check Tools and Techniques for Removing Backgrounds).

22 Responses to “Use Images with a White Background”