The Computer Vs. The Chair 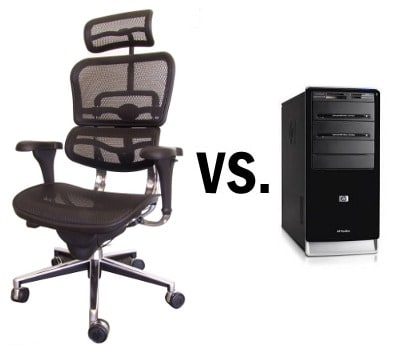 I start by telling you that we humans get tired if we need to stand up for many hours in a row, and in order to solve this problem we invented the “chair.” The most primitive chairs appeared thousands of years ago, and they were basically blocks of stone large enough for a man to sit. Over time we started using wood, metal and plastic to produce more comfortable chairs. I also tell you that I use a very sophisticated chair (it’s actually the one in the image above), which aims to fit the human body perfectly and to provide an ergonomic experience. Still, it’s only a chair.

Next I tell you that I also use a “computer.” I explain that the computer is a programmable machine capable of performing arithmetic and logic operations incredibly fast. The first general-purpose computers appeared in the 1950s, using vacuum tubes. After that the inventions of the transistor, the integrated circuit and the microprocessor completely revolutionized this technology, making computers much faster. In fact the computer sitting under my desk has two processors, each one capable of performing over 2 billion instructions and calculations per second! Thanks to its power and versatility, I explain, the computer is considered one of the most important inventions of the human race, and it changed the way we work and live both deeply and permanently.

At this point I turn to you, the alien, and ask: “So, which one of these two devices do you think is more expensive here on earth?”

I am pretty sure that if you really were an alien you would say that the computer must cost a lot more than the sitting device (i.e., the chair).

You are not an alien, though, so by now you should know where I am going with this narrative. Yes, my point is that I find it both curious and surprising that a chair, despite being a sophisticated one, can cost as much as $1000, while with $300 or so you can already purchase the most powerful personal computer on the market.

Sure, we can dig deeper to understand what is going on here. But you can’t deny that the fact is damn curious at a first sight.

One could argue that the raw materials used on each product have different costs, but I don’t think this would be enough to explain the price difference.

The branding and commodity aspects play a role, too. Somehow chair manufacturers managed to de-commoditize the product. It probably started with Herman Miller and the Aeron chair. After its introduction in the market chairs weren’t simply chairs anymore. You had the average chairs, and then you had the premium, ergonomic ones. As a result prices for those premium chairs sky-rocketed.

Computers, on the other hand, became commodities along the way. Today most people don’t care if they are going to purchase a Dell, a Lenovo, an HP or an assembled PC with no brand at all. They just care about the speed and memory of the computer, because they know it’s going to work anyway. As a result prices went downhill.

Another important factor here is the health one. As you probably know, when our health is involved we don’t hesitate about spending a lot of money. Given that most people today spend 8+ hours sitting on a desk, and given that the chair you use can either make or break your back (or so the manufacturers want us to believe!), you can understand why the demand for premium chairs is booming (and why prices are so high).

Now we have a more clear picture of what is going on. Still, when I look at my chair and at my computer, and remember their respective prices, I can’t help but get amused.

What about you, do you also find this curious? Do you think there are other factors shaping those prices? Leave a comment below.

23 Responses to “The Computer Vs. The Chair”