If you head over to TechCrunch, one of the largest blogs (and websites for the matter of fact) in the world, you will see that they just released a redesign. 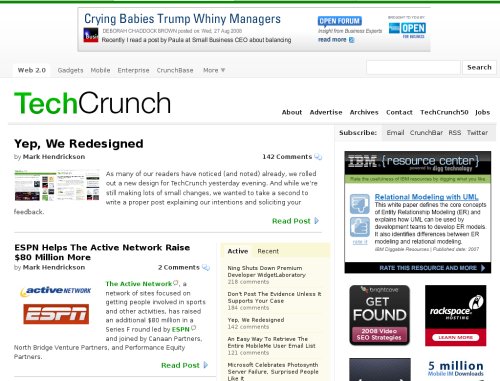 There are many interesting things to notice on the facelift. First of all they have migrated to excerpts on the homepage. I have been an advocate for that layout for a long time, and I had also predicted that most popular blogs will end up using that. TechCrunch was one of the latest large blogs still displaying full posts on the homepage.

For more inputs on this issue check the post where they announce the redesign. There are over 180 comments on it, some criticizing the change, some congratulating on it.

Another interesting point is that they inserted a new 300×250 ad block on top of the sidebar, pushing the 125×125 ad blocks down. This could mean that they are seeing better returns with CPM ad deals and not with the direct adverting ones.

Finally, the “Subscribe” section on top of the sidebar is currently only being displayed on the homepage, and not on the single post pages. It is probably a mistake on the coder’s part, or they will end up many subscribers on the long run (not that they need them, I know, but still).

27 Responses to “TechCrunch Got Redesigned”