We often forget that YouTube is the second largest search engine in the world. Being a site that hosts videos, we tend to miss the fact that a lot of people also use YouTube as a search engine to find what they want and need. These are the people who like to consume content in the form of video and are usually more qualified buyers and subscribers than the visitors from search engines.

A few years back, if you posted a video on YouTube with the relevant keyword in the title, it would rank in the top 10 results easily. But nowadays there are so many videos being uploaded in YouTube that YouTube SEO has become as important as website SEO. As an added bonus, one can optimize their YouTube videos and move their rankings up in YouTube search result pages just like in Google search results.

Many marketers have talked about YouTube SEO so I will start with the most elusive concepts first and then I will cover the frequently talked about tips as well.

While watching YouTube videos you would have noticed a button ‘CC’ in the bottom right corner. CC stands for closed captions. YouTube is becoming global now and videos created in India are being watched and shared by people in US; videos from Europe are reaching people in Sri Lanka and so on. Captions not only enable more people to consume your video but YouTube also crawls the content in the captions! This has been proved by many experiments where we include a unique text string inside the captions file and when that string is searched on Google or YouTube the video will come up! 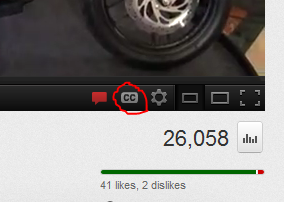 Earlier it used to be a complicated process to add CC to a video – one would need to specify the start and end time of each line and it would take hours. But recently YouTube introduced a speech recognition technology/feature which automatically detects the start and end of each line spoken and matches it to the video’s audio. So all you need to do is upload the script of the video and the captions will appear exactly in sync with the video. It is amazing how YouTube does this – but it is also the reason they are the No.1 in this market.

So a video on a topic with CC should definitely outrank the video on the same topic with no CC provided other SEO factors have also been taken care of.

2. Adding the Script in the Description

If you are creating the script for the speech in video, then adding the same script in the description of the video shouldn’t take much time. Google indexes this as well.

3. Naming the Video File with Keywords

If you are uploading a video about the ‘Health Benefits of Organic Foods’ then the file name of the video should be something like organic-food-benefits.avi or something similar. MOV0234.AVI is not going to be meaningful. The viewer of the video does not look at this but YouTube gives a relevancy credit to the file name because if your file name is named with your keyword then there is a better chance that your video is about what it says.

This probably sounds straight forward and simple and you may even be tempted to skip this paragrapgh – BUT WAIT. I am about to say something which will blow you away.

YouTube gives relevancy credits to videos where people watch it for a longer time. This is not just a theory but has been tested by us. We uploaded two videos with almost the same SEO factors built in but the only change was the perception by the real human visitor. One video was engaging and the other video was not engaging to the real humans. 6 months later the more engaging video was ranking much better than the other video. So yes, YouTube gives credit to videos which are more engaging because it is a good way to measure the quality of the video.

For the purposes of guarding my niche from competition, I cannot reveal the videos I tested – so if you have a hard time trusting me, you can ignore this fact at your own risk.

If you are posting a video on a fresh YouTube channel it is not going to have as much SEO power as the same video uploaded on a channel with has a lot of other good videos on the same topic. This is similar to website SEO – Posting an article in a fresh blog vs. posting an article in a high PR established blog makes a difference between heaven and hell.

So always try to have established youtube channels for each of your niche and avoid posting videos on fresh channels. Also avoid posting irrelevant videos in the channels – it may dilute the SEO power of all the other videos on that channel.

6. Posting HD Videos Instead of SD

It is astonishing how many marketers do not even mention about uploading HD videos. Again this has been tested by us in several occasions. HD videos out-rank standard definition videos every time.

You may think that YouTube may not prefer HD videos because it costs them a lot of storage space and bandwidth – but they have more resources that you can imagine. The reason why they limit the length of the videos is not because of lack of storage or bandwidth but to prevent people from uploading copyrighted videos. This has been confirmed by YouTube itself.

It makes sense that a HD video should be better than a standard video. If someone is investing the energy and resources in creating a HD video then the content could be equally good.

So try to upload 1080P videos whenever possible and if you are doing screen cast or presentation videos – 720P should do the job.

Some of the other commonly talked about SEO methods are

Hope you found my insights useful. Please leave you comments.

This article is written by Deepak Raj who blogs at BikeAdvice.in . He is very interested in Video Marketing. His YouTube Channel (youtube.com/bikeadvice) has more than 3000 subscribers and nearly 3 million video views in total.