50% of Our Readers Work Full Time on the Internet

I must confess that I was surprised with the results. When I launched the poll last Monday asking our readers whether or not they worked full time on the Internet, I was expecting at most 20% of them would say “Yes.” 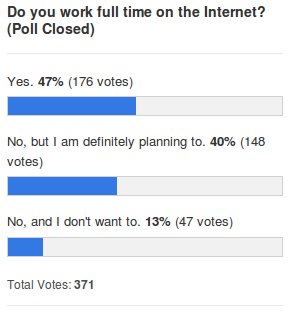 Anyway, I am glad to know that almost 90% of our readers are either working full time online or planning to. I firmly believe in this professional path (more on this on a future post).

Thanks for everyone who answered the poll, and stay tuned for the next one.