Make Sure Your Pop-Ups Aren’t Breaking Your Site

As I wrote a while ago, the web (particularly the Internet marketing sphere) is going through a small pop-up mania. After some years in disgrace, the intrusive technique is back to vogue.

Personally I don’t like pop-ups, but I also know that website owners have the right to use whatever techniques their want. Additionally, if they offer me outstanding content, sometimes I will bear the pain of closing a pop-up to read it.

From an Internet marketing point of view I also understand why people started using it again. The conversions are incredibly high, and the annoyance factor is not so bad as to have a tangible impact on your traffic (most of the times at least).

If you are using pop-ups, though, you must make sure that the code is working properly and not breaking your website. A good idea is to check it on different browsers, for example.

Just to give you an idea, today I was browsing on the site of Michel Fortin, one of the most famous copywriters around. Right after entering it the pop-up appeared, and the screen looked like this: 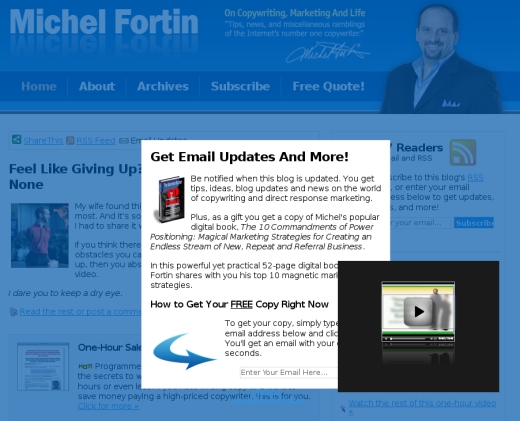 As you can see the YouTube video was overlapping with the pop-up. As a consequence, the “Close” button was hidden, and I couldn’t do anything. I was literally blocked from visiting his website. I couldn’t even use his contact form to let him know about the problem!

I have seen similar problems on many other sites too.

If you want to use pop-ups, therefore, run several tests to make sure they are working properly and that visitors will be able to close them easily.