A couple of weeks ago my dad called me saying he wanted to let me know about his latest “Where do we come from?” theory. He is a physicist, and we often talk about those metaphysical and existential issues.

His theory was very unorthodox, yet feasible (more on that later)

This little talk we had, however, gave me the idea to create a website. I spent sometime looking for domain names, and decided to go with ExistentialQuestions.com. The site is already live, and I am doing a pre-launch today, so go check it out. 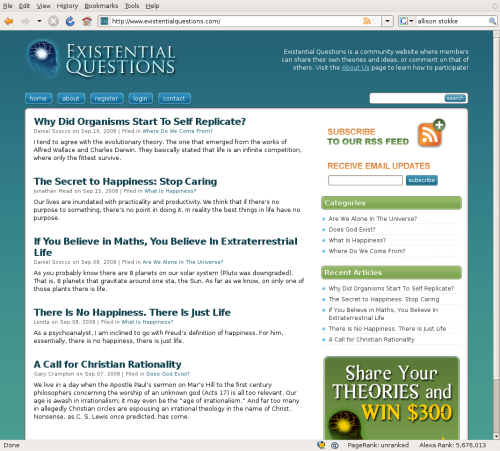 I want to make this website an open community where people can join and share their own theories and ideas about those existential questions, including:

I am sure that many people like to think about those issues as well, so I am trying to give them place where they can hang together, share theories, comment and rate the ideas of others.

The format of the website will be like an open blog. I thought about creating a Forum, but I think that trying to answer to those questions is not an easy task, therefore it is better to give the stage completely to one person at a time (the post) and let others leave comments below.

To kick start things and get some articles there I am also holding a small competition. Basically we will track the rating on each article from now until October 31, and on that date the article with the highest rating will win $300 cash!

Do you think you know the answer to those existential questions? Do you have an interesting or curious theory that you want to share? Head to ExistentialQuestions.com and give it a shot!

Ah, about my dad’s theory. He said he is gathering some facts to make it more bullet proof, and he will post it there soon. He is aiming for the $300 also!