Buy a Whiteboard For Christmas

Or ask someone to give you one as a gift.

I bought my whiteboard one year ago, and it was one of the most productive acquisitions on that time frame. It is it is just an amazing albeit simple tool. When I am outside or traveling I use a notebook to take down notes of ideas, but when I am in my office I just write them on the whiteboard, since it is placed right above my computer. 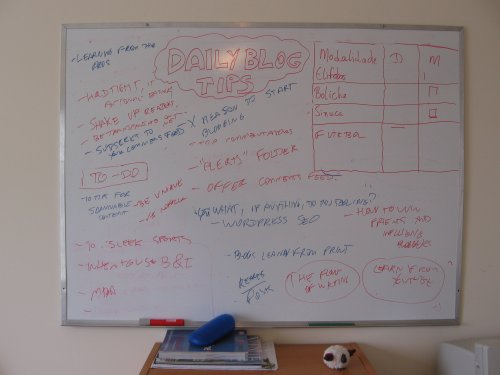 As a blogger it is essential that you keep a list of articles to be developed and ideas for future posts, and a whiteboard is perfect for that purpose. Moreover, it can also help you with to-do lists, reminders and idea brainstorming.

Who knows, you might even use your whiteboard to integrate some posts, like the guys from SEOMoz do.

28 Responses to “Buy a Whiteboard For Christmas”