Your Calls to Action Should Go Below The Post

There are many WordPress plugins around that will insert a call to action on the top of your posts. Some people even do this manually. Lately I was visiting some blogs that use this strategy, and I realized that perhaps it is not that effective, and sometimes they might even hurt the user experience.

Before proceeding let me clarify what I am talking about. The What Would Seth Godin Do plugin is a good example. Once you upload and activate it, whenever a new visitor comes to your website, he will be presented with a message on top of your page that will say something on the lines of:

Welcome! to My Blog!, it seems that you are new to this site. If you want to get regular updates you can signup to get email alerts or subscribe to the RSS feed.

Sociable is another similar plugin. It will basically identify if the visitor is coming from a specific social networking site, and it will present a tailored message to him. So if someone comes to your page from Stumble Upon, it will show him a message like this one:

Hello fellow StumbleUpon, if you like this page, don’t forget to give it a thumbs up! You can also see my StumbleUpon profile here.

You get the idea.

So why do I think the strategy of using those plugins and calls to action on top of your pages and posts is not efficient, and perhaps even a bad idea? Because their positioning is completely wrong. They should be placed at the bottom of your posts and not on top of them!

Let me illustrate my argument with a real example. 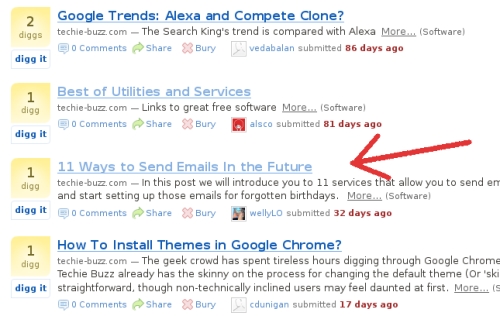 Suppose I am browsing on Digg when I suddenly come across a story that grabs my attention: 11 Ways to Send Emails in the Future. (Notice I am using Techie-Buzz as example only because Keith uses both plugins I mentioned there. The blog itself is very good and has excellent content).

The title of the story sounds interesting and I decide to click and see what it is all about. Once I click there, however, I will be presented with the following page: 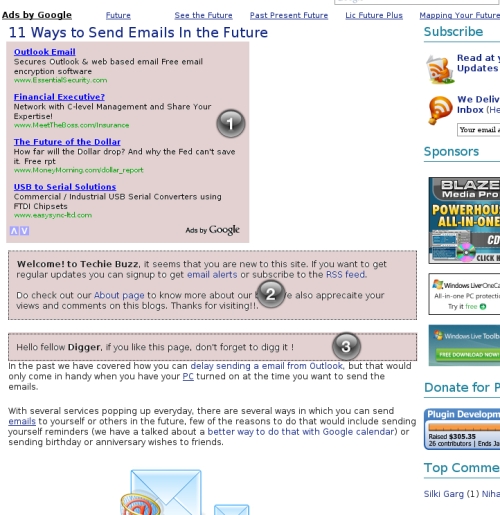 As you can see, right below the title there is an AdSense unit (1). I am not against having ads, but you need to consider that this large rectangle is already taking space and making it harder for me to find the actual content I was looking for.

I move on, and then I find yet another message that distracts me from the content itself (3). This one is coming from the Sociable plugin, and it is encouraging me to Digg the story. But hey! I haven’t even had the opportunity to read it yet, how could I digg it without knowing what the story is about?

As you can see, those calls to action are ineffective and even counter-productive if positioned on top of the posts. Sure it is a good idea to encourage visitors to subscribe to your RSS feed and to vote for your stories on social bookmarking sites, but you must make sure that this call to action will appear to the user when he has the right mindset on, and that is after he is done reading your content.

As a rule of thumb, I try to put as few content as possible between my headlines and my posts (in fact I don’t even put the author name or date there). This is to ensure that there will be no distractions from the moment I grab the attention of the visitor with a headline until the moment he actually starts reading the content.

If you put too many things between those two stages, you might lose a fraction of the visitors right there.

Those are my opinions obviously, and I would love to hear what you guys think about the issue.