I take a look at a blogger’s post (published or unpublished) and explain what’s working well and what might need some tweaking. The posts can be on any subject, and we’ve had quite a range so far. 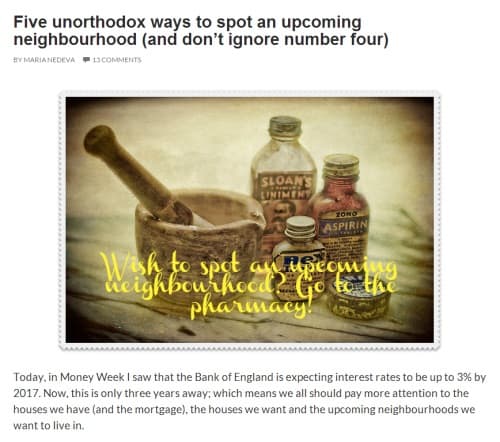 Here’s what I thought:

This is a solid, well-put-together blog post with a lot going for it. I particularly like Maria’s use of:

Although this post is reasonably long, Maria uses short paragraphs and bullet points to make it easy to read. These are always a great idea – they add white space and make the post look much more inviting.

#2: Clear Conclusion and Call to Action

Maria ends the post with a short section headed “Finally…” While it’s not usually necessary to have a “Conclusion” or “Finally” or “Summary” section, longer blog posts can benefit from it. The last line of the post is a call to action (two questions encouraging readers to comment) in bold italics so they stand out.

As you’d expect from the title, Maria’s post has five clear, separate points. She’s using a subheading style, “Header 2” (or <h2> in HTML) for these, which means they not only stand out well for the reader but are flagged up to search engines as subheadings.

There were a few possible tweaks I spotted while reading the post. (If you have additional ideas, or disagree with me, feel free to add a comment below!)

I’d not come across the exact phrase “upcoming neighbourhood” before – I’d refer to these as “up-and-coming neighbourhoods”. Maria might want to double-check what phrase her audience are most likely to use, as if she’s picked the wrong one, it could have an impact on search traffic.

While I’ll be the first to admit that I make occasional mistakes, I did spot quite a few typos in Maria’s post.

I’ll give a few examples:

#1: “John looked at all available houses in two miles radius.”

John looked at all available houses in a two mile radius.

#2: “If you see people in dressing gowns collecting the main …”

…offers a very similar chance of spotting an upcoming neighbourhood.

I know these are really tiny, picky things, but a handful of small typos can spoil an otherwise good post.

#3: No Definition of “Upcoming”

It may be the case that Maria’s readers are already clear on what constitutes an “upcoming” (or “up-and-coming”) neighbourhood, but I felt the post needed to be a bit clearer. Maria’s primary definition appears to be “where house values are going up”, but obviously this rise is due to a number of factors.

I’d like the introduction to include a clear explanation of what you’d typically see in an “upcoming” neighbourhood – or a link to a post that explains this. (To make room for this, I’d cut the third paragraph of the post, which I think wanders a bit too far from the point.)

I’ve been very picky, but overall, I thought this was a strong, well-written post with some (as the title says) unconventional ideas. What did you think? Share your feedback with Maria in the comments.