The DiggBar Changes Things At Digg (Some for the Worse)

First things first, what is the DiggBar? It is basically an iframed toolbar that was released by Digg this week. The toolbar has two purposes: the first one is to serve as a URL shortener service. The second one is to allow users of the toolbar to interact with the Digg stories in a different way.

Now I must admit that the first part of the toolbar works well. It bring an interesting concept for URL shorteners: the fact that you don’t even need to visit Digg to use it. You just need to add digg.com/ in front of the URL of any web page, and the shortened link will be created on the fly. You can try with this page. Just go to the address bar in your browser and type digg.com/ in front of the URL (which will look like this: digg.com/https://dailyblogtips.com/…). 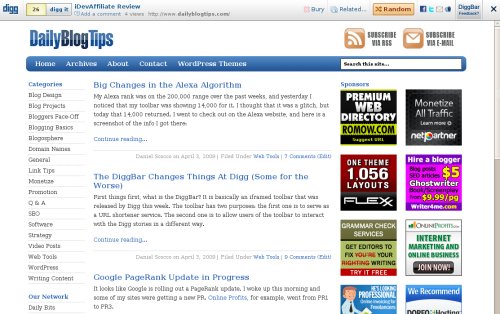 OK now that you saw it works, please hit “Back” on your browser and return to my site!

This example brings us to the second part of the toolbar (the one where I am skeptical about). The toolbar now wraps both the pages that used the URL shortening service and the Digg stories inside an iframe. They even changed the way the front page links work. Just head to Digg.com and click on one of the stories on the front page. Until last week, upon clicking there you would go to the website in question. Not anymore. With the entrance of the toolbar, you are now redirected to a shortened URL of the Digg story, and the content is presented inside an iframe.

For Digg, this might be a brilliant move as it will keep all the traffic inside their site. For webmasters and bloggers, it might become quite annoying. Why? Here are some of the reasons:

1. The iframe wrapping technique is quite old on the Web. It started appearing on sites late in the 1990s, and a lot of people got angry with that. Some even called it content theft. Digg after all would be displaying your content inside their website. Some webmasters might be fine with that, but many are definitely not.

2. With the iframe technique, Digg will inevitably take some real estate from the websites that will appear there. Considering that such space is in the header, it also has a lot of value for advertisers. What if they start showing CPM ads there, on top of the content of other websites?

For the small blogger those might be small details, but when you consider big sites like The New York Times, the issue gets a new dimension.

It will be interesting to see how the webmaster community will react to this. Of course Digg has the right to shape its service in whatever way it wants, but I am not sure if Digg would be where it is today without the support of bloggers and webmasters from around the world.

Personally I will also stick with bit.ly for URL shortening. The URLs there are shorter, have embed stats, and, above all, they don’t iframe my content….

Browse all articles on the Social Media category or check the recommended articles for you below: