Some months ago I wrote a post asking for readers to submit a screenshot of their own computer desktop, so that I could group them together and create a collection of blogger desktops.

By the time I was still using the default Ubuntu wallpaper and people said that it was too boring. I agree with them, and recently I decided to change it into a more functional thing, as you can see below (click to enlarge). 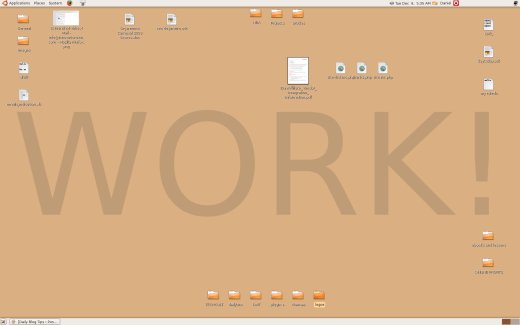 So yeah, this is the anti-procrastination wallpaper. Simple but effective. You could even consider using some variations like “Damn Lazy Ass, WORK!”. Give it a try and see if it will motivate you to work more and waste less time.

23 Responses to “The Anti-Procrastination Wallpaper”