If some years ago the battle for the leading CMS online was still open (we had WordPress, Drupal, Joomla, TypePad, MovableType, to name the main ones), today we have a clear winner. As you guessed, it’s WordPress.

The guys from Royal Pingdom did a small research and found out that almost 50% of the top 100 blogs in the world are using the platform. Three years ago this number was “just” 27%. You can read the full article here: WordPress completely dominates top 100 blogs. 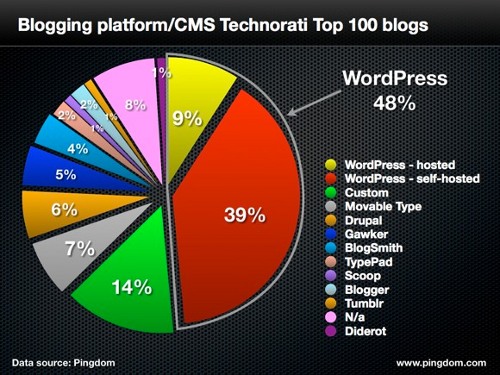 The interesting thing is that even mainstream news organizations are using the platform. For instance, the Bits blog of the New York Times uses it, as does the CNN Political Ticker.

Obviously such popularity has drawbacks too. The main one is that WordPress is probably the most targeted platform of hacks and malware. That being said it has been a while since we saw a major breach on the code that enabled many sites to get attacked.

Overall I think the project is becoming mature, and I like the fact that they are not bloating it with too many unnecessary features as people tend to do with iterations of popular products.

In other words, I think the usage of WordPress as a CMS will only increase in the coming years, and I don’t seen any other platform threatening its position. Do you?

18 Responses to “It’s A WordPress World”