Interview with Timothy Sykes (The Guy Makes $50,000 Monthly From His Blog) 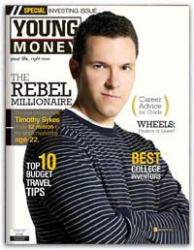 A couple of weeks ago a reader emailed me to ask if I knew anything about a guy named Timothy Sykes, who is supposedly making some killer money with his blog.

By the time, I didn’t, but the email got me curious, so I went to check out what the fuzz was all about. Tim, as he calls himself, is a 26-year-old investor, author, and blogger. He managed to make over $1 million trading stocks, and created his own hedge fund. It closed in 2007 though, and now he is venturing in the World Wide Web.

After checking his website for a while I can say that the guy is clever and very innovative. A good post to get started is Suck On This John Chow, My Blog Made $45,000 Last Month!.

Anyway last week I sent him some questions via email and he answered them. Check it out!

1. How long have you been blogging?

Hell yes! Forget about just making more money than most doctors do, it’s incredibly fulfilling to cut through all the regulatory and snake-oil salesman BS that pollute the finance industry. It’s about teaching investors and traders how corrupt the stock market is. And possibly even more important than the teaching is the learning–I’m learning what works, whats readers wants, how the internet is evolving–we’re in the bottom of the 1st inning with the internet, there’s gonna be stuff we can’t even imagine coming out over the next few years and it’s gonna be very exciting. The more you know…

3. You claim to have earned $45,000 from your blog last month, and that your traffic is 3 times smaller than John Chow’s one. How is that possible?

My business model is different, he’s all ad and affiliate-based, while my focus is on creating educational products through my own publishing company, BullShip Prress, LLC, namely my PennyStocking Instructional DVD that makes penny stock trading understandable and TIMalerts, a real-time trading alerts subscription service, both of which I promote endlessly through my blog.

Mind you, I tried Chow’s business model–admittedly only half-heartedly because I have problems promoting all the frauds in finance–but it didn’t work for me…so I adapted.

4. After reading your earnings disclosure I noticed that you listed together your DVD product and the monthly alerts service. Do they generate an equal percentage of the $35,000? If you needed to use only one of those methods, which one would you choose and why?

They’re about equal, but I’ll break them down in the future. At first, I just wanted to teach others how to play the game with the DVD, but I forgot that most people are fat and lazy, so the real-time trading alerts–where the subscribers don’t really care to understand the game–they just want to make $. It’s pathetic, but you gotta give the people what they want.

5. Do you think that bloggers that only focus on making money via advertising are making a mistake?

YES! Advertising has been a major flop so far for me and my partner, Adarsh Dilip–who is the incredibly talented artist behind my bad ass websites–but we’re just in the beginning stages so we’re not worried as there’s literally no competition whatsoever in the brutally honest finance blogging niche.

6. Is it easier to make money trading stocks or working on the Internet?

Trading is definitely easier, but it’s also riskier. As I detail in my book “An American Hedge Fund”, I got away from my core trading strategy so I’m working off a $300,000ish loss, so I didn’t really want to risk my remaining $500,000 net worth.

Also, trading penny stocks truly is a niche so it’s not a very scalable money-making strategy whereas my internet business is, as evidenced by the fact that my monthly earnings have gone from $15,000ish in May and $25,000ish in June to the current $45,000.

Mind you this all happening during Wall Street’s slowest season so I fully expect to be making $100,000/month by early 2009.

7. I see you are experimenting with many new marketing and promotional tactics, like rewarding visitors for comments and other contributions. Has it been working well?

Bribing my readers with little rewards–TIMbucks –has been our biggest flop as it turns out people are tired of these stupid little rewards and prefer honest information so they can make some real money. I’m skeptical of all these sites that offer their users rewards, methinks if they claim to be successful they’re full of crap!

And yes, we do plan on having contributors on our upcoming website for beginners, http://www.PennyStocking.com, because I alone can’t keep up with all the stories that need to be written.

Unfortunately, other than Adarsh, I know nobody’s gonna work as hard as me–think 16-18 hours days–so it’s gonna be tough to find others to give me quality stuff. You know anybody?

8. What is the most common mistake you see bloggers making around the web?

They don’t want to put in the time to make it a success, they’re not willing to drop projects that prove to be failures, they don’t listen to their readers. Again, this is just the beginning of this industry, nobody knows what’s gonna work for each niche, you gotta try everything.

Browse all articles on the Monetize category

55 Responses to “Interview with Timothy Sykes (The Guy Makes $50,000 Monthly From His Blog)”