I am Willing to Try Bing, But So Far It Sucks

As you probably know Microsoft launched its newest search engine a couple of weeks ago, called Bing. Some blogs and newspapers reported that the search engine quickly gained market share, and that on some days it was ranking in the second position, above Yahoo!.

If nothing else I also think that we should give Microsoft the benefit of the doubt and try Bing out. Competition is healthy in any market, and Google is not far from having a monopoly in search (thanks to the quality of its service, it is true, but still).

One good move from Microsoft was to opt for a clean homepage. I can’t stand Yahoo! exactly because in order to search there I need to go across all the clutter that they put on the front page.

The problem are the search results. They might need some time to tweak the algorithm, but so far it has not impressed me at all. Here are some examples that I gathered in five minutes before writing this post: 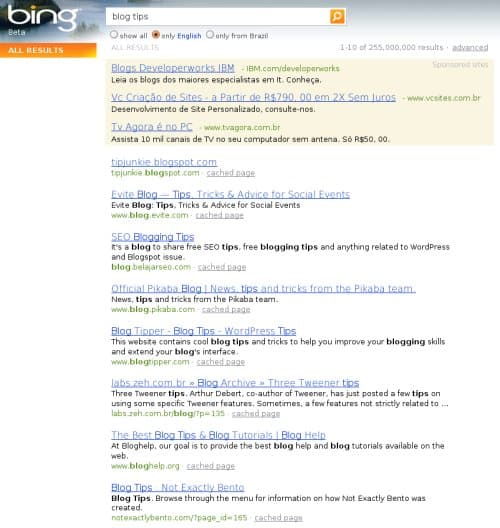 Daily Blog Tips is number one on Google and Yahoo! for that term, but on Bing it was no where to be found. Problogger should be there too, but I couldn’t find it either. 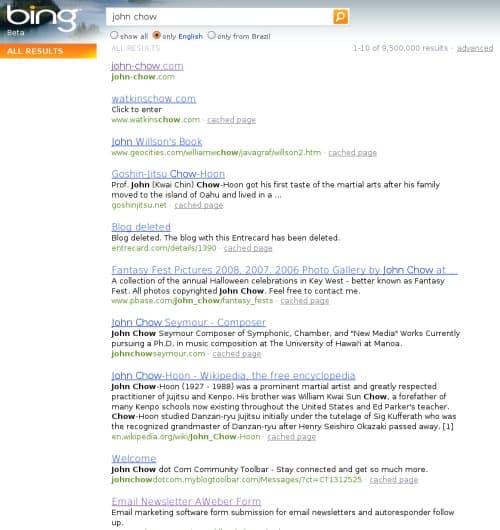 The original John Chow was not there, and instead the first result pointed to a squatter domain (www.john-chow.com) that just has some ads…. 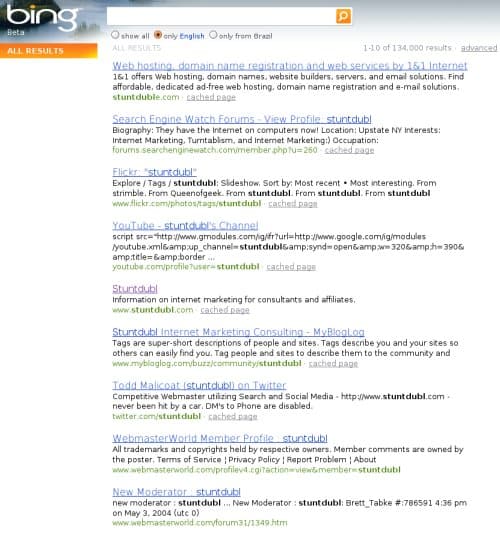 I wanted to give Bing a nudge, so I searched for the exact name of Todd Malicoat’s blog (he is a top SEO guy, and the blog is pretty famous too). Still Bing displayed Todd’s blog only in the fifth position.

For now, therefore, I am sticking with good old Google.

What about you, have you tried Bing? What kind of results did you get?

Update: It looks like the results are not that bad if you are US or Canada based. The curious thing is that I did use the “English results only” option before searching, so I don’t know how come my location is affecting the results page.

64 Responses to “I am Willing to Try Bing, But So Far It Sucks”