Well, to some extent we already knew this (read Could Indexation Time Affect SEO?).

The Google Operating System blog, however, is reporting an extrapolation of this pattern. According to the article Google might be artificially promoting recent web pages to the point of out placing trusted and established websites like Wikipedia.

They gave the example of the term “January 1 tcp/ip.” Yesterday Google changed its logo to celebrate the anniversary of the famous Internet protocol, resulting in a sudden increase on the number of related search queries. 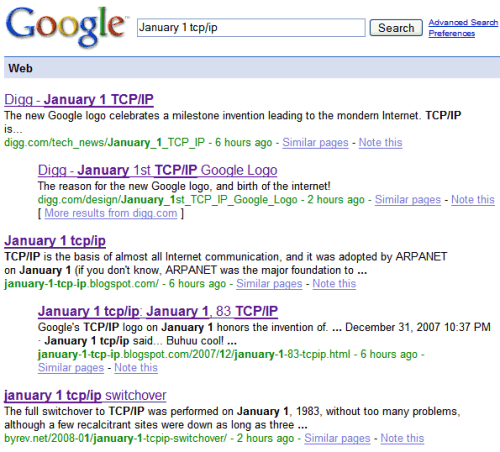 If you performed a search for this term, though, on the first page you would find only recently created web pages like Digg submissions and Blogspot blogs that were trying to leverage this traffic.

I checked again today and results are still dominated by recently created material. If nothing else this is an interesting trend to watch. The question that emerges is: “for how long will the results keep this bias?”

It is also a good idea to keep an eye on search queries that become popular overnight. If you move fast using the right URL and keywords you could outrank Wikipedia!

Update: Patrick from Blogstorm has a possible explanation for the whole issue.