Yesterday I published a guest post from Abhijeet Mukherjee titled Do You Know Your Visitors? 5 Points to Consider. A couple of hours later Abhijeet messaged me on Gtalk to let me know that Google was not indexing my backlinks to his blog, but rather the link from a scraper site that had copied part of the post.

This made me curious and went to check for myself. The first thing I wanted to know was if my post was indexed already by Google or not. I copied one sentence from the post and search it in Google, with quotation marks to find only exact matches. The result was pretty surprising: Google had already indexed 2 scraper sites, but my original post was not on their index yet, as the image below illustrates: 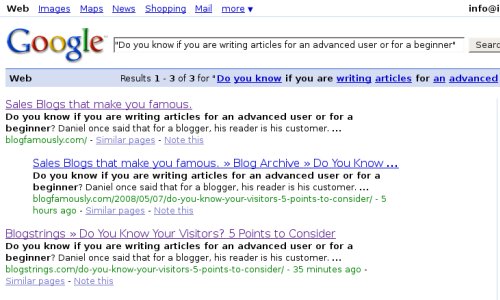 I repeated the search query today, and my post is now showing on the first position. Regardless, I find it pretty weird that Google would index first scraping material and only afterwards the original source. The same thing was happening to the indexation of the backlinks.

Anyone know what could be the cause for this flaw?