Careful When Migrating Your Feedburner Feeds to Google

As you probably know, a couple of weeks ago Google decided to open AdSense for feeds to all publishers, and by doing so they also started the migration of Feedburner feeds to their own servers (Google acquired Feedburner a while ago, that is why).

In other words, people that wanted to start using the AdSense for feeds feature would need to apply for a migration, and get their feeds changed from feeds.feedburner.com/feedname to feedproxy.google.com/feedname.

The migration process is not smooth and automatic, as one would expect (it is 2008 folks…) Instead you need to manually send a request via this support page, and the Google team will handle the transfer for you.

When I saw how they were going to structure the deal, I immediately thought: “Hmmm, I think I will wait some time and see how it will work out for other people.” Messing up with the RSS feed of a blog is not a small thing.

I am glad I did that, as there are many people complaining about the migration process.

Some experienced long downtimes on their feed pages. Others reported that Google Blog Search stopped indexing their blogs once they migrated their feeds. Just consider that if you search the Feedburner Help Group for “migrate or feedproxy” you will find 208 results – read 208 bugs or problems that people faced doing the migration.

My friend from HowToGeek.com also sent me an email mentioning that after he migrated his feed he became no longer able to see the list of email subscribers. That feature just vanished from “Subscriber Management” page, as you can see on the screenshot below: 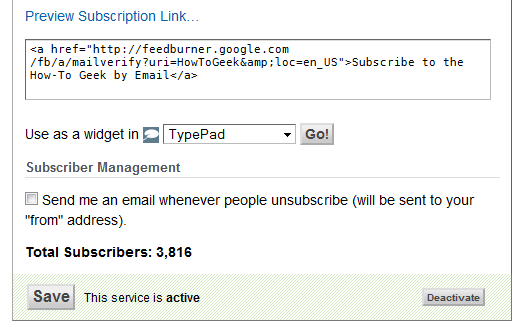 He told me that he has over 4,000 email subscribers, so this is not a small problem.

Apart from losing the details about your subscribers, this missing feature also locks you with Google’s email service. On Feedburner you could still switch to another email delivery service, say Aweber, by exporting the list of email subscribers and importing it on the other side.

If you plan to make the migration soon, therefore, I would save and export the list of email subscribers forehand.

Hopefully Google will fix those problems soon. Until then, cross your fingers!

39 Responses to “Careful When Migrating Your Feedburner Feeds to Google”