This Tuesday we have two experienced online entrepreneurs on the Bloggers Face-Off. They have been playing on the Internet for quite some time, and it is no surprise the amount of money that they are making from their websites.

JohnTP is the man behind the homonymous blog, which is very popular on the technology news and blogging tips sphere (in fact the blog is ranked on the 12th position inside the Top 25 Blogs About Blogging list).

Everton Blair is our second blogger. He owns two blogs, the most popular being Connected Internet. If you are interested on technology, gaming, mobile news and gadgets this is a must read blog. Now to the interview! 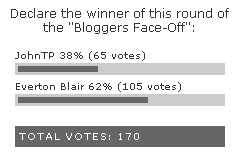