Welcome to the 10th edition of the Bloggers Face-Off. The feedback for this project was beyond my expectations, and the double interviews are becoming a corner-stone for Daily Blog Tips.

I am also very happy to bring two heavy-weights of the blogging scene this week. Brian Clark is the author of Copyblogger, an extremely popular blog with copywriting and online marketing tips (he needs no presentations, I know…).

Chris Garrett is a veteran on the web. He has been developing websites and online ventures since 1994. Recently he launched Chrisg.com, a blog about new media and blogging. Despite being 3 months old the blog already counts more than 2000 RSS subscribers. Let the battle begin! 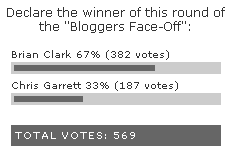