After featuring Probloggers and affiliate marketers, online money making gurus and SEO experts it was time to introduce some gadget bloggers! Gadget blogs represent one of the most popular niches on the Internet so this edition of the Bloggers Face-Off should be stimulating.

Al Carlton started Coolest-Gadgets about one year and a half ago, and the blog is already generating over 30,000 page views daily and counts more than 20,000 RSS subscribers. Vic Da Silva is the owner of UberReview, a popular gadget reviews blog (which is also very well designed). Let the face-off begin: 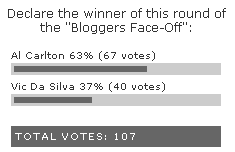