Last week I wrote an articled titled Pop-up Mania! Will They Come Back To Vogue?, where I described the current trend of bloggers using pop-ups to encourage people to subscribe to their newsletter.

The conversion rates on those pop-ups are miraculously high, hence why a lot of people are jumping on the bandwagon. It is also known that pop-ups annoy many people, and they could hurt the traffic on your site. The key question then becomes: are the benefits of running pop-ups larger than the drawbacks (for the site owner point of view)?

We had a poll on that post, and the results were interesting. The question that I asked was: Would one pop-up offering you a newsletter subscription be enough to make you stop visiting a website? The result is as follows: 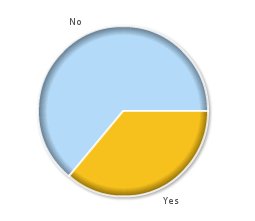 The results might seem encouraging to people that want to try out pop-ups, but are they really? Even if 64% of people wouldn’t mind your pop-ups, there is a whole bunch of them that would. I would think twice before using something that would annoy even 30% of my readers.

This overall negative effect from the pop-up might also be related to the quality of the content on the site and to the authority of the author. In other words, perhaps a popular and established blogger could get away with the pop-ups without losing too many readers, while a new blogger could end up hurting his traffic a lot if he decided to try this technique.

Personally, I will not start using pop-ups on any of my websites, because to me the user experience is more important than increasing my subscriber list right now. At the same time, I can’t say I will never use them, and I don’t condemn people who do.

I think it is a matter of personal opinion and testing. Also, if someone is writing quality content for free, I think he does have the right to use whatever ads or promotional techniques he wants. It is up to the readers then to decide if they wanna bear with that or not.